One of the trends for 2017 drinks is apparently going to be plant waters. Hyped to be full of goodness and said to be packed with health busting effects, I took a little look into them. 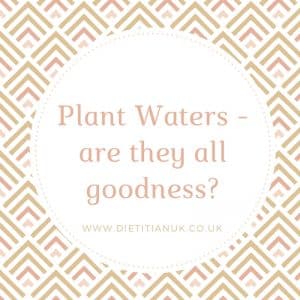 Birch water is one that has been around for a little while, making headlines in 2016 and is available in some supermarkets. It is meant to cleanse and detoxify the body, a claim that instantly makes me pull a face. How can a water possibly do a better job than the bodies own built in detoxification system – the liver and the kidneys do a pretty awesome job all by themselves. Even more maddening is the fact that this water is often flavoured and can have sugar added to it, but is then marketed as being a lower sugar alternative to coconut water. I’d reply that tap water is even lower in sugar content and a lot cheaper!  It contains 7.5kcals per 250ml serving and the nutrients manganese, potassium, zinc and xylitol.

Maple Water comes from the sap that is usually boiled and made into Maple syrup. As you can imagine it is pretty sweet at 3-4 g sugar per 250ml serving. It does contain a large amount of phytochemicals and antioxidants, but the amount of these you will actually consume through a serving of the water is likely to be low. You would get more from the maple syrup itself as it is a concentrated form, but obviously your dentist and I would say it’s not a good idea to be having too much of that on a regular basis. There are a pile of interesting claims on maple water, based around it helping with exercise and being anti-inflammatory but these are just not substantiated. 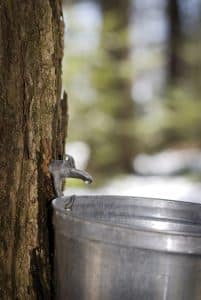 Cactus Water is an intriguing one as it is not actually water. It is made from prickly pear concentrate, preickly pear extract and then water is added in. Not quite what I was expecting. The claim here is that is helps with hangovers! However this is based on a one-off small study. Catcus pulp contains betalains, an antioxidant  which has been shown to stop LDL oxidation involved in cholesterol levels, but no studies have been carried out on the water itself, so who knows how much of it you would need to drink to get an effect and how much that would cost. I would suggest  eating a good range of fruit and veggies is a better option.

Aloe Vera Water is another cheeky one as it  is sweetened with agave and a standard serving is 60-70kcals. There has always been a lot of chatter about aloe vera and it’s healing properties so I imagine this could become a popular one. However there is  no real research conducted on the water currently.

Artichoke water is a yellow-green water made by squelching up whole artichokes! I’m not convinced it will taste good without sugar and flavouring added in. In does contains some vitamin A, B and C, magnesium and antioxidants and claims are that is can help lower cholesterol but we have no proof of this.

Watermelon Water is one I would like to try out and it would be great to see more studies conducted on it. It is made from the pulp of the watermelon and contains beta-carotene, potassium, vitamin C, lycopene and the amino acid L-Citrulline. In a few small  studies, watermelon extract has been found to reduce blood pressure, could the same be true for watermelon water?

Coconut Water has been popular in the UK for some time now. It contains B and C vitamins, calcium, magnesium and potassium. If you like the taste then that is great but it does contain calories and sugar so when drunk regularly that can add up.  It doesn’t provide much more benefit to exercisers over water and a banana but it also won’t do any harm for those who prefer it.

These waters all sound like a bit of a con to me, they have a hefty price tag and don’t deliver enough on the nutritional front. However if they help people to drink a bit more water and are an alternative to a soft drink then that is a good thing. Personally I will stick to filtered water.

One thought on “Plant Waters – are they all goodness?”